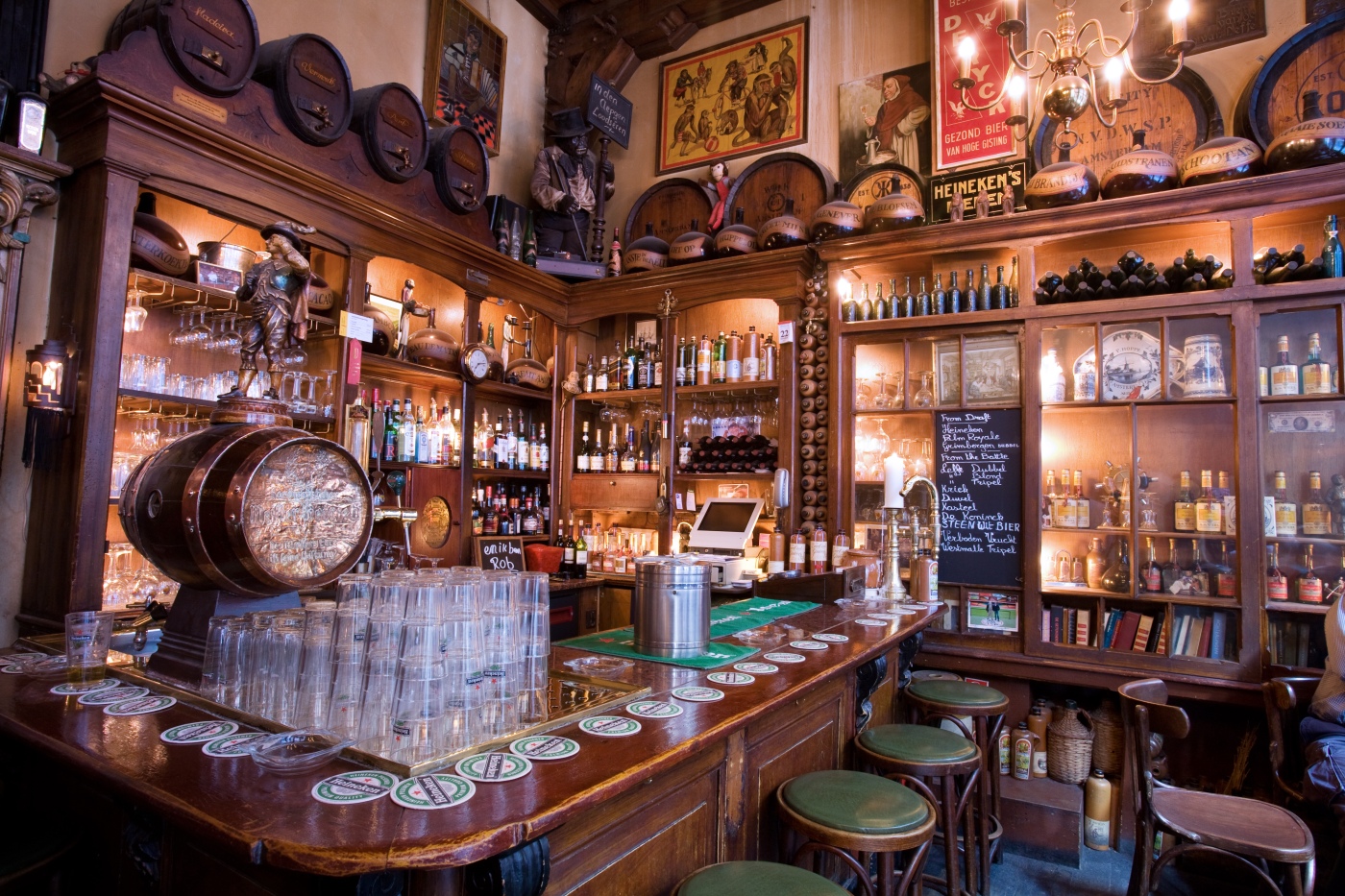 Coming from a different country requires lots of adjustment: the teaching style is different, the weather isn’t the same at home, and the food is not what your mum used to make back home. On top of that, you can’t hit your favourite bar with your usual friends! Thanks to a lovely phenomenon called globalisation, nowadays you can find your favourite drink almost anywhere in the world, from that fancy cognac you like so much to the simplest of wines. However, if you want to know how the Dutchies get their drink on, we have some tips for you!

First of all, forget the Irish and English pubs. Yes, you can still find a couple in the centre, but that’s not where most locals spend their time (unless there’s a big night of football, then you find all the guys there, watching football). Instead, try to look for a bruincafé (brown café) for the ultimate Dutch experience. They are called brown cafés because the interior is traditionally made of wood and have a dark and cosy look to them (see our cover photo).  These bars are not as crowded or loud and have a much more chilled atmosphere. The best known bruincafés in Utrecht are Café de Stad and Café Ome Willem, but most bigger cities are filled with quirky bars just waiting to be discovered.

The best beers in town

Next, be careful about what you drink. You are more than welcome to order your usual, but if you made the effort to visit a local watering hole, take the extra step and order something typical of the Netherlands. Surprisingly, that may not necessarily be Dutch but Belgian – the hundreds of types of special beers that you can find all over Utrecht. Even though the Dutch pride themselves in brewing the best beer, even they admit that the Belgians might just be a tiny bit better at creating these delicious brews. Visit Café België for a wide selection of beers you won’t forget (unless you drink too much).

Getting festive with your beer

While you’re at it, why not check out the famous Streekbierfestival in Utrecht? This event is organised twice a year and the next one is from the 24th till the 26th of March. Plenty of local brewers come together to offer you a taste of their delicious craft beers in various cafés all around the centre of Utrecht. This is the perfect opportunity for you to get together with your other international friends and organise a beer-tasting tour while discovering Utrecht itself!

If you enjoy tasting all the different kinds of beers, you don’t need to wait until the Streekbierfestival to do so. There are so-called proeflokalen in the Netherlands where you can try different kinds of beers while listening to an explanation about them throughout the evening. This programme isn’t only fun because you get to sample various special beers but also cultural as you learn about the production process and the history of the drinks. One of the best known proeflokal is De Leckere brewery – it’s a little far from the centre but definitely worth a visit!

The hard liquor of the nation’s youth

Are you not a fan of beer but still want a taste of the Netherlands? Gold Strike might just be the drink for you. It’s a cinnamon-flavoured liquor that contains gold snippets! Depending on the bottle, the gold flakes in them might be of different purity (but none of them present a serious health risk). It’s of high alcohol percentage (around 50%), so it is common to consume it in a long drink, mixing it with tonic, coke or some sort of an energy drink. According to the experts, however, you’re supposed to drink as a shot, so bottoms up!

If you’re looking for a more sophisticated drink, Jenever could be the right choice. The rest of the world calls it Dutch gin and it is the traditional liquor of not just the Netherlands but also of Belgium.  According to the first written references about this drink, jenever was already around in the 13th century! There are also two types of it: old and young, and they differ in the distilling techniques. Despite the gin being made of the juniper berries, it is not supposed to have a strong taste but more of a neutral one, similar to vodka. You can get this drink anywhere in the Netherlands, but the true Jenever cities are Schiedam, Groningen, Amsterdam and Delft, so you might want to hop on a train and get a taste!

Obviously we could go on and on about all the special bars and quirky drinks you can find in your new home, but if we listed all of these, the list would never end. Instead, we rely on you to tell us about your favourite spots or drinks in Utrecht!

Just remember: whatever you do, drink responsibly, and share your best stories with us!