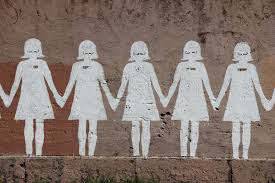 This wonderful citation comes from Evgeniy Levchenko, a Ukrainian ex-prof football player, who’s been living in the Netherlands for quite some time now. A few days before International Women’s Day (8th of March), the Dutch newspaper AD posted an interview online (in Dutch), in which Levchenko talked about the differences between the men-women-relations in the Netherlands and Ukraine. And to cut to the case quickly: he wasn’t very positive about the way the Dutchies handle things. Not only do the women behave like men, it also goes the other way around: Dutch men are feminine. This might need some explanation.

Let’s start with the women: ‘Dutch women are pretty, but why don’t they make any effort? It’s just sneakers, jeans, no make-up or jewellery… Even Doutzen Kroes (a Dutch top model, red.): perfectly ordinary.’ Even though it sounds a bit insulting this way, this may actually be true. When I (Dutch girl, born and raised in the Netherlands) look around me at my female friends, classmates or family members, I have to admit that none of them are really extravagant when it comes to their looks. My friends (me included) usually only wear make-up when we’re going out, or sometimes just a subtle lipstick. Does this make us less feminine or less attractive as women? I’m inclined to say no, but then again this is the cultural context I grew up in.

Then the men. Levchenko, who grew up in Ukraine, has a whole other idea of masculinity in mind than what he sees from the Dutch men. They let the girls pay for food and drinks or take out the garbage, and don’t hold open doors for them, to name but just a few examples. And the girls let them. In Ukraine, Levchenko explains, things are much more ‘traditional’: the man takes care of the woman, the woman makes herself attractive for the man. That also means, for example, that she goes to the bathroom ‘to powder her nose’ while the man picks up the check.

Has he seen this correctly? I can only speak from my own experience. Personally, I get uncomfortable when a guy I’m dating always pays for everything (it happened with one guy). I don’t always wear eye-liner, because it irritates my eyes. And when I’m having a lazy day, I hang out in my XL-pyjama shirt and leggings. Does that make me any less a woman? Depends on who you ask, I guess. All I know is, when someone approaches you in a bar or a club to tell you that you look nice tonight, it doesn’t really matter whether you’re all dressed up, whether it’s done by a guy or a girl, and whether they are ‘traditional’ or ‘modern’: it is a compliment nonetheless, and that’s what it’s all about.